Finding the almost exact nostalgic places that you had visited before, is indeed hard to come by, not only does it also consists of the many heartfelt feeling at the same time.

“Wuzhen Water Town” is one such example that brought me back numerous flashback memories of my time spent in Venice, Italy during my Europe trip in year 2012.

Having the similar architecture layout that was built alongside canals, it was nicknamed as the “Venice of the East” in China!

​It is a historic scenic town that is located in northern Zhejiang Province, China, which had became a hit with tourists, on top of being a suitable short getaway trip even for the locals. 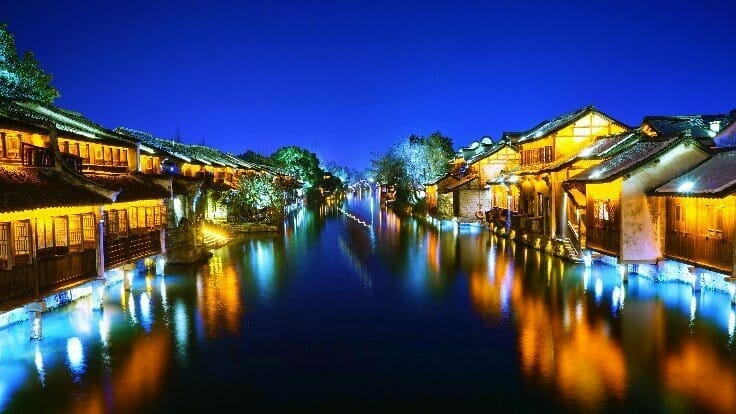 ​“Wuzhen Water Town” is similar to an “exhibition centre” whereby one is required to purchase an admission ticket in order to gain entry to visit the historical town.

The town display its rich historical heritage through its ancient stone bridges, stone pathways and delicate wood carvings, which would certainly questioned your thoughts about its existence.

It is divided into six traditional districts, namely, “workshops”, “local-styled dwelling houses”, “culture”, “food and beverages”, “shops and stores” & “water township customs and life”, that are housed in an “east-west-east” circuit layout for visitors to witness the reenactment of traditional practices & cultures! ​

My family and I were here in late March of year 2015, where we were indeed blessed to had spent a night over here at “Wuzhen Waterside Resort” to explore the whole town.

I was really amazed and had found a liking for this place as it clearly reminded me of the numerous ancient china movies where villagers lived and worked at!

The whole facade of the entire place were mostly covered with traditional old wood, concrete, rocks & with a touch of dull coloured paint.

​It was really an one-of-a-kind place that had kept my heart calm & at ease, while really emerging myself in that slow & laid-back kind of life; reminding me of what an ideal vacation should be really like.

We navigated along the streets of the old town to discover more, pertaining to the rich heritage of this place, crossing bridges & walking the sideline of the canal.

The exterior walls of the town were all well preserved, leaving stains & dirts behind from the old paint, and growing of withering trees.

Some parts of the place really felt like a ghost town as it was rather quiet & peaceful; suitable for those whom are taking an opportunity to rediscover themselves or sorting out their thoughts.

On several shophouses that we passes by, there were some ancient props & decorations pertaining to ancient China that was hanging outside, in particularly one that we found it rather amusing was the hanging of dried chilli along with various skeletons & meat of animals!

Indeed, every spot was so photogenic that I could not helped but to snap as many pictures to remember this place, while constantly thinking of the greatness it would had been if I would have brought my best friend along, whom shared the same photography interest as me! ​

The “Shops and stores” here were mostly selling traditional kind of souvenirs which is certainly great if you are buying it for someone elderly or for those who appreciates the richness of ancient China heritage!

I am not too much of a fan for shopping here, so it definitely saves me a bit of money, while not forgetting to patronise shops that sells cooked food & snacks which suits me more!

We had our dinner at a nostalgic old noodle’s hut which was satisfying, that had carried a taste of Uniquely Chinese style.

​The food here are more towards the local Chinese flavour, so it might take awhile to get used to it, but you certainly know it cant go too wrong when it is a noodle’s dish in China!  ​

​As night falls, there were still a pretty much of difference in the sightseeing experience around this old town!

​The sight of yellow dim lights were switched on by the numerous shops & houses, turning the whole of “Wuzhen Water Town” into myriad of colours that is surrounded by water canals!

There are still some on the other hand who had preferred the traditional use of lanterns as a light source of energy, had contributed to the “flavour” of the old ancient China heritage!

The night is also suitable for boat rides in the canals to enjoy over the night starry skies, while discovering “Wuzhen Water Town” from a different perspective!

We decided to give the boat ride a miss due to the poor weather condition as it was raining, and decided to take a couple of slow walks to enjoy the beautiful scenery, while heading back to our accommodation to rest for the night.

​As shops and houses tend to close much earlier in the evenings, there were certainly some small nightlife activities that one could do, such as chilling over some drinks with a friend or so!

It was definitely a great productive day of walking about, that I had discover so much more into ancient historical China, while admiring at its beautiful architecture layout & scenery.

​On the following morning, we had a delightful breakfast at the resort lobby, after which by some quick photography near the compound of the resort, before heading back to our tour bus to continue our journey to Hangzhou, China!

I had really enjoyed myself discovering the whole of “Wuzhen Water Town” that I really fell in love with the whole nostalgic experience, & had really yearned to visit back this place once more with my future half in the near time!

​It was indeed a romantic and slow pace way-of-life that is suitable for a great getaway or a place to sort out your thoughts from the busy & hectic suburb. This place is probably one of the reasons why I had found a liking to visit China!

​Average Price: Below USD $25 per pax