Skip to content
If you had knew me well, you would not be surprised to know that Chicken Rice is one of my ultimate favourite dish of all-time! 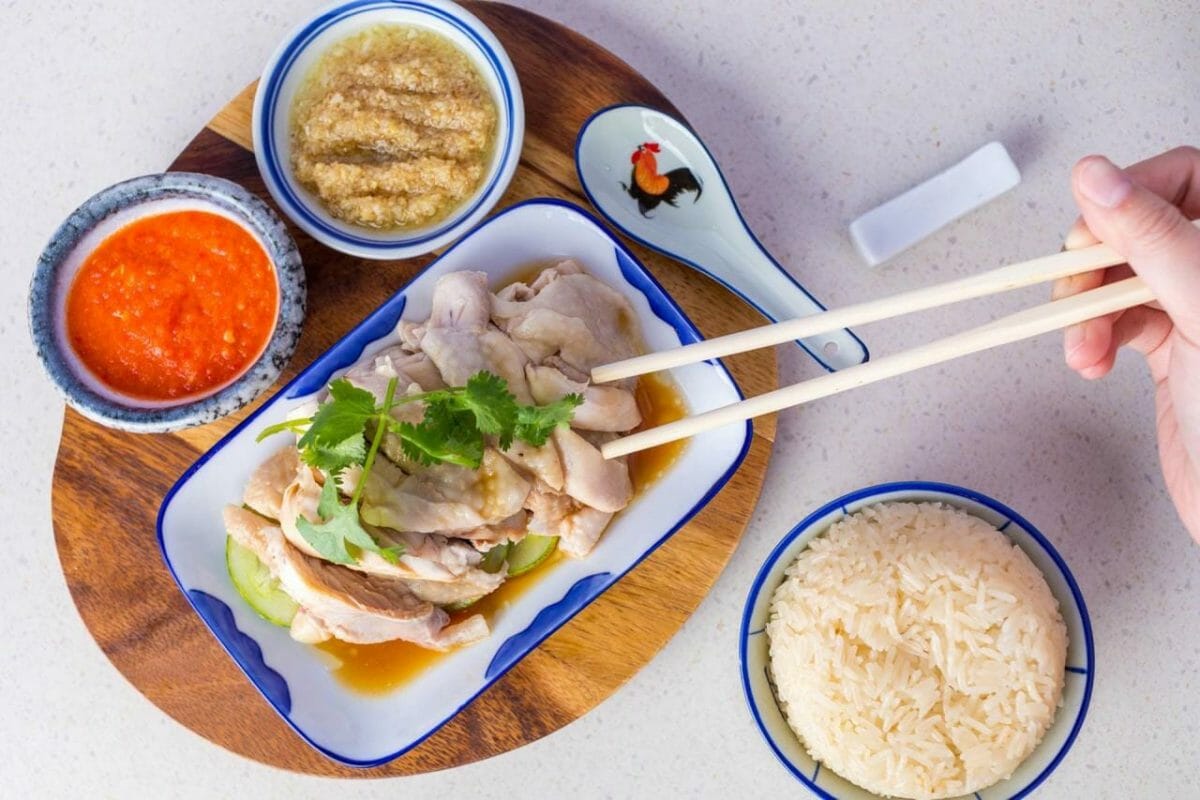 I have been sharing a few of those blog post back then & for this time, let’s do a featuring for one of my best, best favourite place that sells this wonderful boiled chicken dish!

Known to be the domination & origin of traditional Hainanese Chicken Rice in Singapore, both Purvis street & Seah street have been incredibly renowned as the paradise for this dish!

​If you are a tourist to this area, be warned by the number of different shops that are selling the exact same dish.

To me, “Yet Con Restaurant” is the best by far in Singapore that sells a very traditional Hainanese Chicken Rice which definitely sets me up all craving for it every single time!

Since year 1940, this restaurant has opened ever since way back even before Japanese occupation and was rumoured to be serving their dish to even the British soldiers who once ruled early Singapore.

​Just by taking a look at the facade of those walls outside the shop with its signboard, it still retained the very old nostalgic early Chinese heritage!

​I strongly believed that this shop would had never crosses your mind if it wasn’t because of someone’s recommendation, as the shop owner had persisted in keeping the shop to be rather humble & low profile. ​

Taking a step into the shop itself, you will certainly be greeted by its distinctive smell of Chicken Rice, along with the sight of very classic kind of wooden chairs & marble tables!

Immediately, more flashback of nostalgic early Chinese heritage will start to surface in your mind, thinking that such exotic places still does exist in modern Singapore!

“Yet Con Restaurant” is a traditional Hainanese restaurant whose specialty dish is their Chicken Rice, also offers other selection of delights such as Hainanese Steamboat too.

​As usual, I would always ordered their plate of boiled chicken that consisted a serving for two person, followed by a plate of gizzard and a bowl of rice to satisfy my palate.

When indulging in a good plate of Hainanese Chicken Rice, the most crucial aspect in my opinion would definitely be their rice!

The rice is one of the biggest differentiating factor that sets all other stalls apart in determining if the overall dish was considered the best.

​To me, the rice served over here was not oily at all and had contained a light fragrance of garlic & shallot! It was certainly soft and fluffy with every grain that one would not even feel greasily sick if eating the entire bowl on its own.

Moving on to the boiled chicken itself, one could really taste the pure freshness of the meat that does not contained any much seasoning added!

The chicken is certainly outstanding as it involves the technique of using salt to marinate, after it has been lightly boiled & cooled.

I could totally taste the firm texture of the meat which was equally scrumptious along with the chicken skin that is not oily at all! ​

​There was also some good moisture that was carried with every bite of the meat, making it a tasty indulging experience!

The next dish which is the plate of gizzard that was on the order list, were among my favourite at this restaurant!

The gizzard is definitely chewy & tender, had carried a good amount of texture to chew on. I would recommend going for this if you are used to the fresh organ flavour that is found in pork and chicken as this one really has a good amount of distinctive flavour to it!

The gizzard is certainly a joy to savour as it is not only juicy, but felt more like snacks to even eat it on its own!

Being a Chicken Rice fan myself, the mandatory need to fully complete my traditional Hainanese meal experience would definitely have to be adding their ginger & chilli to my dishes!

The ginger that they served here was of a purée mixture, was not too strong from the ginger flavour, had just the right amount of “kick”! The chilli on the other hand, had just enough spices & contained a small amount of saltiness at the end of every bite!

​ I really have to agree that these two “sidekicks” is indeed a necessity to complement to the overall richness and flavour of this entire dish! 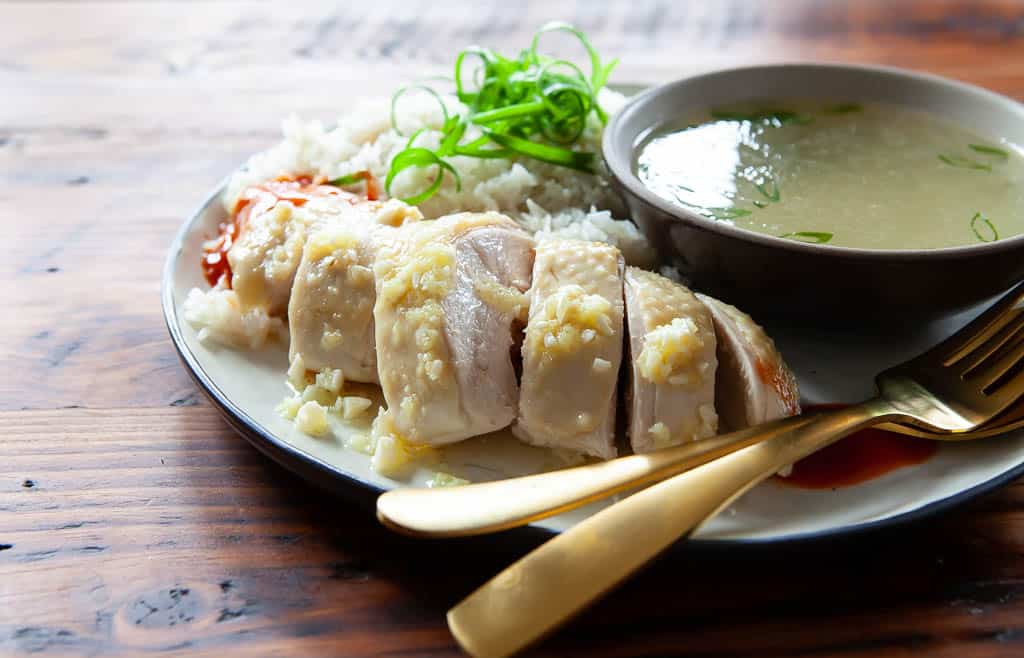 Lastly, the bowl of soup which had came along, was one of the best remedy in cure for thirst and an option to cleanse your throat from the variety of flavours!

The soup is very light & refreshing, carrying a taste from the white cabbages, cilantro & preserved dried cabbage that had been added.

​You could really taste the sweetness of the soup from the vegetables instead that is unlike different from most soup out there which consisted largely of peppery taste instead!

As a whole, this is definitely by far my ultimate favourite shop that sells traditional Hainanese Chicken Rice!

The fact that its rice & chicken was pure and not oily, had left a deep impression on my tastebuds!

I totally enjoyed savouring over it especially for the rice & gizzard itself that could be even eaten right on its own!

Indeed, this is truly an extraordinary place which I certainly hope would maintained and continue on its recipe for the many years to come!

​A definite must to visit for all tourists and especially to all the dear Chicken Rice fans out there who are looking to explore true authentic Hainanese taste that would leave you all mouthwatering & craving each time! 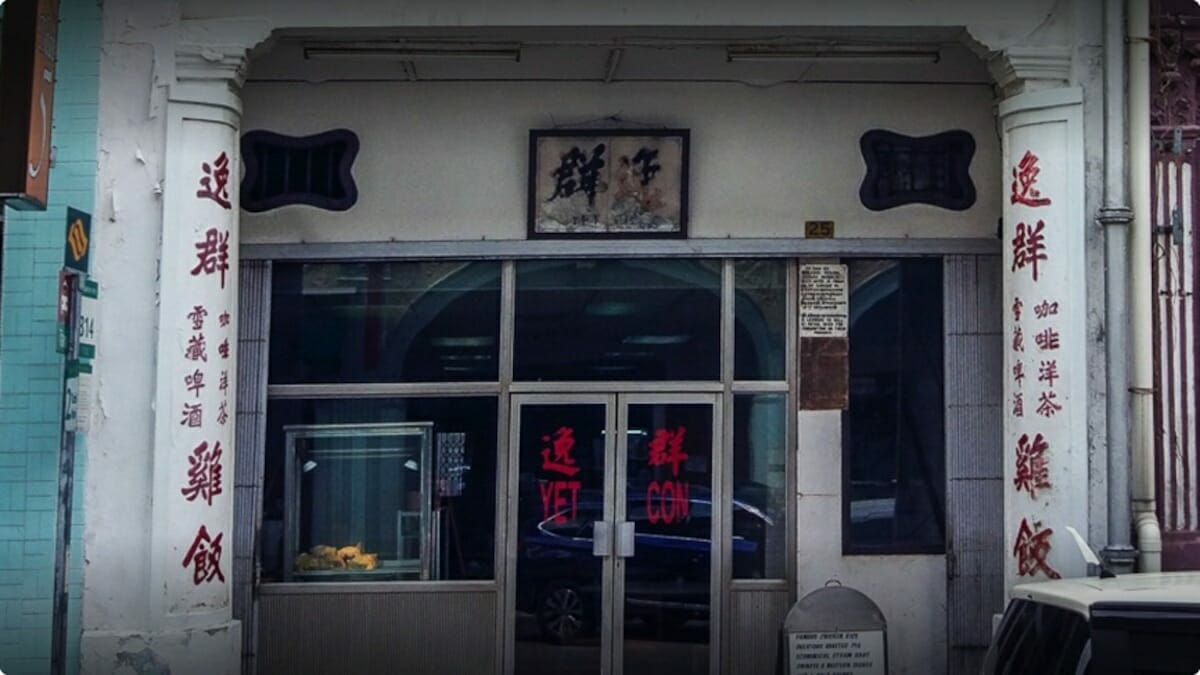 Although it has a young reputation, the Yet Con Restaurant is a stalwart of the Hainanese community in Singapore. The restaurant first opened in 1940, serving an exceptional rendition of Hainanese chicken rice. You can also order roast pork and Hainanese pork chop. You won’t need to worry about your meal being overloaded with sauce, and the chicken is tender and fragrant. Yet Con’s chicken is also not drenched with sauce.

Yet Con is a fast-growing restaurant in Singapore

If you’re looking for a Singapore chicken rice stall with a retro touch, try Yet Con. The restaurant’s orange payphone and abacus cashiers are not exactly slick, but it’s worth a try. The food itself is delicious and the service is fast, too. Still, it’s difficult to capture the place’s vintage charm on Instagram, so you might be better off opting for a more traditional menu at one of the many Singapore restaurants that specialise in classic dishes.

One of Singapore’s earliest and most iconic eateries for Hainanese chicken rice is Yet Con Restaurant on Prinsep Street. The restaurant has been around since the 1940s, and despite its unfashionable decor and lack of charm, it serves superbly tender chicken packed with flavour. Its regular customers include a mix of food nerds and faithful suits. Its menu is so extensive that it is difficult to choose just one dish to try.

The yet-convenient restaurant is located right on the famous Singapore River. It is a one-of-a-kind eatery with the kind of authentic, heartwarming Hainanese chicken rice that makes the whole meal worthwhile. The chicken is tender and is boiled on trays rather than steamed. The chicken is boiled in a traditional Hainanese way, and its juices are collected around the edges.

It has no air-conditioning

If you’re looking for a place to get some chicken rice in Singapore, yet don’t want to spend a lot of money, then try Yet Con. This retro restaurant features an orange payphone and abacus at the cashier. The retro decor isn’t for everyone, and you’ll be stuck with annoying flies. But that doesn’t matter. The food is good and the staff is friendly and helpful.