Skip to content
I have long dreamed of having perfect mind-blowing Cantonese roasted delights and, only by far, can this legendary shop by the name of “Kay Lee Roast Meat” live up to such extraordinaire!

Established since year 1940 ‘till present, “Kay Lee Roast Meat” has already maintained a status for setting the local standards of Cantonese roasted delights in Singapore! 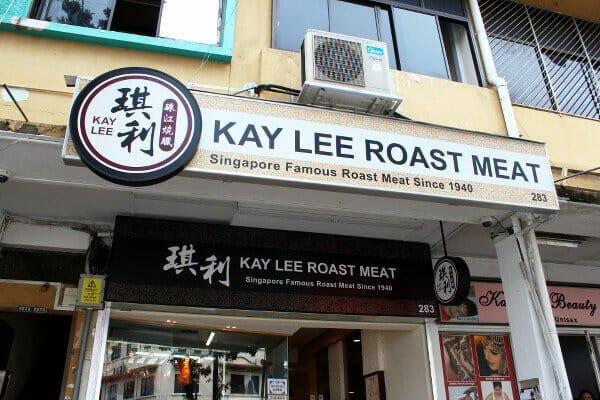 It is a reputation that has been passed down from generations of father to son & now, of the current present, has recently been sold for $4 million to conglomerate Aztech Group for its divine recipe, as the couple are getting old with ages.

​The standard of their dish has been maintained all these years by using the same technique of roasting meat in a charcoal stove and with a philosophy in mind that it goes way beyond being just a recipe, but rather also a heritage & a tradition that they believe in! ​

The interior of the shop!
Since the handling over to conglomerate Aztech Group, “Kay Lee Roast Meat” has now expanded its chain to 7 outlets across the island, with its main original outlet still located at 125 Upper Paya Lebar Road. 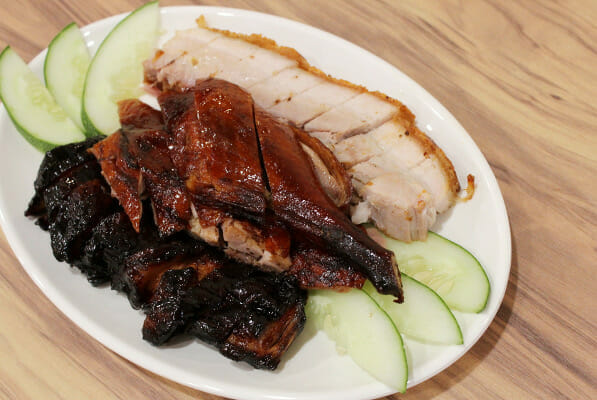 Taking a step into its main original outlet, you will definitely be overwhelmed by the nostalgia of olden days as its side walls are hung up with numerous historical photos of its origin, newspaper cuttings of interviews, food awards & not forgetting photographs of celebrity visits such as that of the famous U.S TV series of Hell’s Kitchen host, Chef Gordon Ramsay!

Food menu!
For this trip, I ordered the “three combination roast meats” of a serving for 2 people which consisted of roast duck, char siew (BBQ pork) & roast pork, all served together in a big oval plate with a touch of cucumber!

​I was immediately overwhelmed by the aesthetically pleasing view of the entire plate of roast colour, that I was certain of falling in love with it! 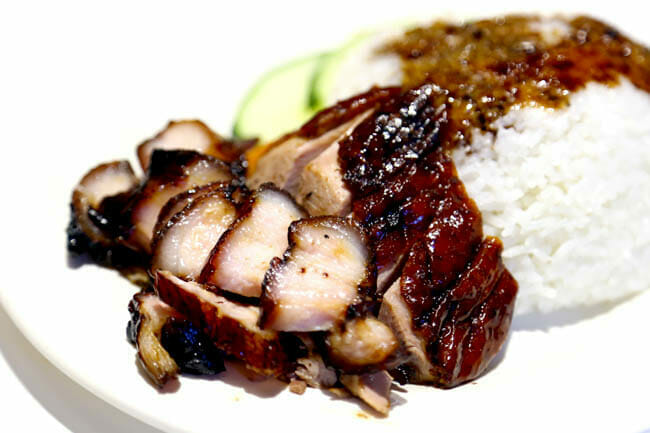 ​The roast duck had a very crispy thin layer of roasted skin that resembles the texture of the dedicate “paper-like” layer of Japanese Nori (edible seaweed)!

​The roasted skin carries a good roasted flavour along with a tender texture to its meat, making it easy to chew as opposed to many roast duck out there, as their meat has a rather hard texture & can be difficult to chew on!

​There was also a bowl of dark soya sauce that came along with the entire plate, which is a definite must “companion” of the Cantonese delight, to provide a sweeter taste.

A bowl of dark soya sauce!
​Moving on to probably the ultimate reason to visit this shop & the legendary roasted meat out of the main primary three, is their char siew (BBQ pork)!

​Taking a first glance at their char siew (BBQ pork) itself, one would definitely be able to identify its unique difference from others that are being sold outside, which is the fact that its meat on the outer layer is dark black in colour, while the inner layer is white in colour.

​Upon savouring it, the heavenly taste of roasted sweetness immediately strikes your mind, bringing an ultimate taste of paradise that you had never felt before from such a delicate roasted delight! The char siew (BBQ pork) was juicy and tender with every mouthwatering bite and carried a slight moisture inside the meat, along with the rich enhanced roasted flavour!

Notably, it was indeed astonishing that despite its outer layer being dark black in colour (heavy BBQ Roasted colour), it did not contain any char burnt taste that was supposed to be salty in flavour (due to the heavy BBQ roasted method)!

​I personally developed a deep liking for their char siew (BBQ pork) as without dipping into the dark soya sauce that came along with the entire plate, it was already very sweet in flavour and was comforting enough to even eat on its own!

The last but not least on the plate of the “three combination roast meats” was the roast pork itself.

I felt that the roast pork was still quite decent out of the rest, where it also has a crisp skin & tender meaty texture, making it equally great to be on par with their roast duck and char siew (BBQ pork).

Apart from that, I also ordered their “Lotus Root Soup” to go along with the entire meal of delights!

The “Lotus Root Soup” was boiled with herbs and spices, containing lotus root, peanuts & pork ribs, and, upon tasting the rich essence of a very light lotus root flavour, is an ideal choice alongside to refresh oneself while indulging in the great delicacy of roasted delights! ​

That extraordinary black Char Siew meat!
​Overall as a whole, I feel that its roasted meat especially their char siew (BBQ pork) & roast duck is a definite must-to-order on the list when you are here!

I’ve really got to say that through my years of travelling around the world, especially to countries like Hong Kong (famous for its Cantonese roasted delights), never have I met any shop there nor so far in my food discovery that sells roasted meat, especially char siew (BBQ pork), better than “Kay Lee Roast Meat”!

​The roasted delights here at “Kay Lee Roast Meat” are definitely worth savouring, but it is also on the pricy side, which might be less suitable for the price-conscious individuals!