Skip to content
Code-named as the “Super crispy prata”, the most recent commotion pertaining to this astounding Indian dish – Roti Prata – is one of the latest talks of the town as the master, himself, is back with a bang.

The delightful duo who go by the name of Mr & Mrs Mohgan reopened their stall in October 2018, located at a new premises approximately 500 metres away from their former location at Crane road.​Hungry diners who are fans of this well-loved dish would have know of this reputable stall – Mr and Mrs Mohgan’s Super Crispy Roti Prata – that sells one of a kind Roti Prata since the year 2006. Arguably and easily the top few Roti Prata’s stalls in Singapore that attracts a typical waiting time of up to 90 minutes long on weekends, it was a saddening news reported in August 2018 when chef-owner, Mr. Somasundram Mohgan, 52, decided to give up his business due to personal medical reasons. As a result, the old stall at Crane road has been taken over by his family’s friend & former stall assistant who are currently running it till this day. Hence, do not be surprised by the two identical stalls that are indirectly “affiliated” but for the actual recipe, it is only well kept to Mr. Mohgan himself.

Given the receptive tastebuds of regulars, they could immediately distinguish the subtle difference between one that is cooked according to the actual recipe or not, and hence most of them actually flocked back to support the duo at their new relocated stall.

This might be a pleasant news to share as the waiting time is now slightly shorter (likely to be the split between the two stalls located at the former & latter premises) and as much as twice the number of seating spots that are available.
​If you are new to Mr and Mrs Mohgan’s Super Crispy Roti Prata, do just literally take the name of the stall as to the dish that you will be getting. This isn’t your typical Roti Prata that is sold almost everywhere across the island, but instead we are zooming into the specific trait of crispiness that is like no other. It was interesting to learn about the inspiration and story of Mr. Mohgan who ingeniously thought of the idea to experiment and tweak his recipe to replicate a Roti Prata to be as crispy as a Chinese fried dough fritter! As usual, they offer 3 different types of dips for you to complement your prata with, namely, Fish curry, Dalcha Curry (given by default if without specifying), and Sambal chili.

For a local taste, I have ordered both their Plain prata and Egg prata that are requested to pair it with Fish curry & Sambal chili respectively.

As aesthetically pleasing as it looks, the glorious sight of golden brown is immediately the telltale sign of what denotes a worthy plate of Roti Prata.
Infused with a smooth buttery taste that is responsible for the overall flavour and essence, the Plain prata is enveloped with a crispy thin crust on the outside.

​You can totally appreciate the delicate, crispy texture that is noticeably different from your regular prata which is so fragrant & appetising on its own. For the Egg prata, I personally feel that it is rather normal although it is packed with a good amount of eggy fragrance and it comprises of a soft, fluffy dough texture. However, just don’t expect the same crispy texture to be replicated in the Egg prata. The accompanied dips are also worth mentioning too especially for its Sambal chili that has carried a slight hint of sweetness & it isin’t spicy nor overpowering. You can taste the distinctive flavour of anchovies in it. Meanwhile, the Fish curry is probably one of the best that I have enjoyed, given that it has a very smooth savoury touch that provides the icing on the cake to my prata’s experience!

​To wrap things up, Mr and Mrs Mohgan’s Super Crispy Roti Prata is undeniably the game-changing name that redefines your typical plate of Roti Prata.

If you have yet to try out this dish for yourself, I believe that the delicate yet crispy texture will impresses you.

On flip side, just don’t expect it to be as crispy as your Chinese fried dough fritter as it is an inspiration that Mr. Mohgan strives towards to.

​I would totally recommend ordering their Plain prata for a unique experience and not too much for the Egg prata on the other hand. I am also pleased to mention that the crispy texture of the Plain prata has maintained a good balance without it being too overly crispy like a fried cracker. As for the dips, I have never foresee myself complementing Roti Prata with Sambal chili which is surprisingly interesting and it goes well together. It is indeed thoughtful for the duo to actually thought of the various dips that encompass both sweet and savoury sides. For the slightly more health-conscious individuals, I am pleased to say that their Roti Prata is not too overly greasy and it will be all worth it, at least for once in a while! 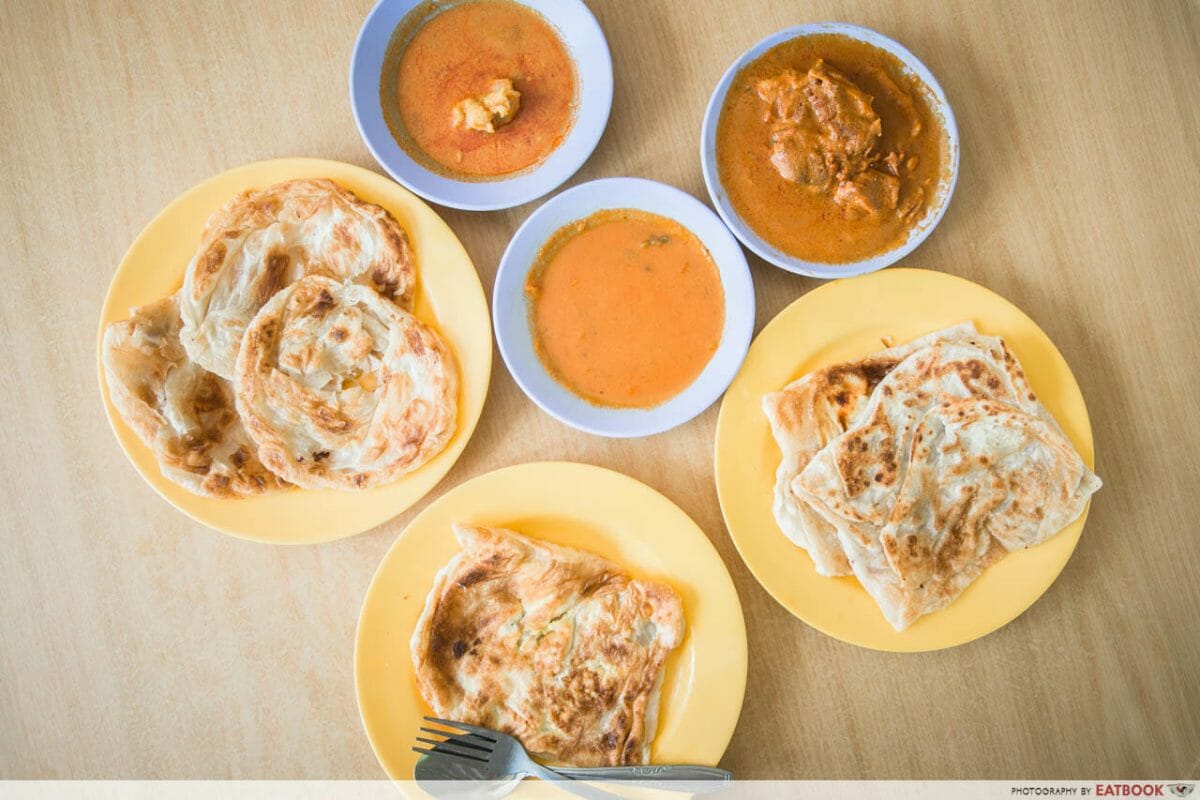 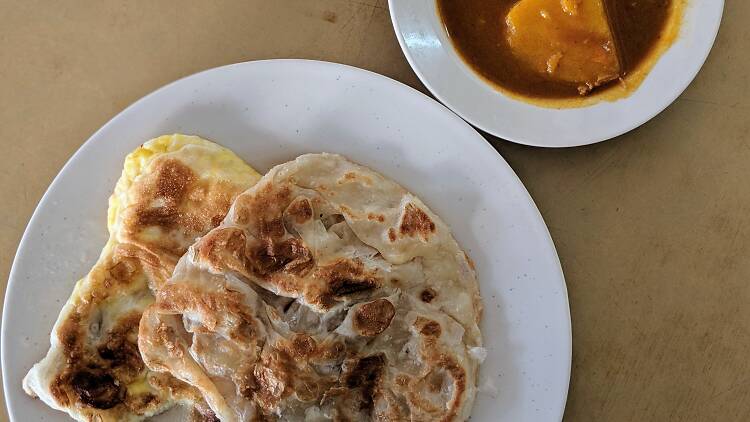 If you’ve ever wondered how the locals get their crisp outside, you’re not alone. The Singaporean food scene is filled with fantastic places to eat. From Roti Prata to Mee Rebus, you’ll be able to find something tasty for yourself in this article. If you haven’t already, you should go there for the best Singaporean roti prata! Also check out these other delicious Singaporean dishes:

If you are craving for Mee Rebus in Singapore, you’re in luck! This dish originated in the Geylang Lorong 1 neighbourhood and is popular among locals and tourists alike. In fact, you can see queues forming as early as 6am. People are often ordering yellow noodles to go, and the gravy is perfectly thick and spicy. You can also find Mee Siam and Mee Soto at the same price.

Sin Ming Roti Prata serves some of the best Roti Prata in Singapore, but be prepared to wait for about 20 minutes for your order. Those who love this local dish will certainly be pleased with this fusion of east and west. The restaurant is located at 24 Sin Ming Road, Jin Fa Kopitiam, Singapore 570024. It is open daily from 6.30am to 6pm. The menu features a wide selection of dishes, including vegetarian dishes.

Mee Soto is the popular spicy chicken noodle soup served at street stalls across Singapore, Malaysia, and Indonesia. This noodle dish combines a chicken broth with thick yellow Hokkien Mee, which is seasoned with a spicy sambal. The spicy broth is served with a super crispy roti prata made with wheat flour, water, and salt. The noodles are also covered in a thick, aromatic curry paste and topped with shredded chicken. This dish is best enjoyed on a rainy day, as the broth is rich and robust, and the spices give it a unique taste.

Mee Soto’s Super Crispy roti prata is another popular option in Singapore. The prata is super crisp and filled with a delicious buttery aroma. The prata comes in a variety of different types of curry, including chicken, pork, and beef. It’s hard to go wrong with either one. The owner will quickly flip the prata while you wait for your order.

If you are looking for an authentic Nonya Laksa, you should head over to Glory’s Nonya Café for a taste. Their version is milkier and not nearly as spicy. It’s also accompanied by generous helpings of prawns, fish cakes, and lemongrass. You can also try their crispy Roti Prata.

Known as the Indian croissant, Mr. and Mrs Mohgan’s Super Crispy Roti Prata is a Singapore institution. The owner, Mr. Mohgan, has been flipping hundreds of roti pratas daily since 1991. Since opening on Crane Road, the roti prata joint has become a favourite with Singaporeans. The roti prata here is famous for its sambal and curry dip.

If you’re looking for a new favorite prata in Joo Chiat, try Mr. and Mrs. Mohgan’s Super Crispy Roti Prata. They use traditional techniques for dough making, with no ghee or milk. This prata is so good that it is known to sell out by noon on weekdays and for half an hour during peak weekends.

Another local favorite is murtabak. Murtabak is made from dough similar to roti prata, and stuffed with minced lamb, egg, onions, and spices. This dish is best enjoyed with curry, and is often served at the popular Kampong Glam food stall. The restaurant also offers bok choy cooked with garlicky brown sauce. This dish is also good for vegetarians. It also has pineapple and dough fritters.

If you want a cheap and tasty snack, Y.R.A Rasool Fatimah’s Super Crispy Roti Prata might be the perfect option. These rotis are available in plain, onion, egg, and chocolate varieties. They are also available in a variety of flavours, from savory to sweet.

Located at ABC Brickworks Food Centre, Y.R.A Rasool Fatimah’s Super Crispy Roti Prata has won Michelin Plate for its prata. The restaurant’s roti is made from fragrant dough and served straight from the bread rack. The crispy, cold and chewy prata is a delightful treat.