My fascination with flour-noodles or better known as Ban Mian or Mee Hoon Kway, it is definitely a dish that I will crave for from time to time.

What I really love about this dish is both the stunning noodle texture & the rich flour fragrance which is a pure “addiction”.

For the non-asian counterparts, it would be comparable to the Italian pasta delights that may be debatable in terms of which actually taste better! 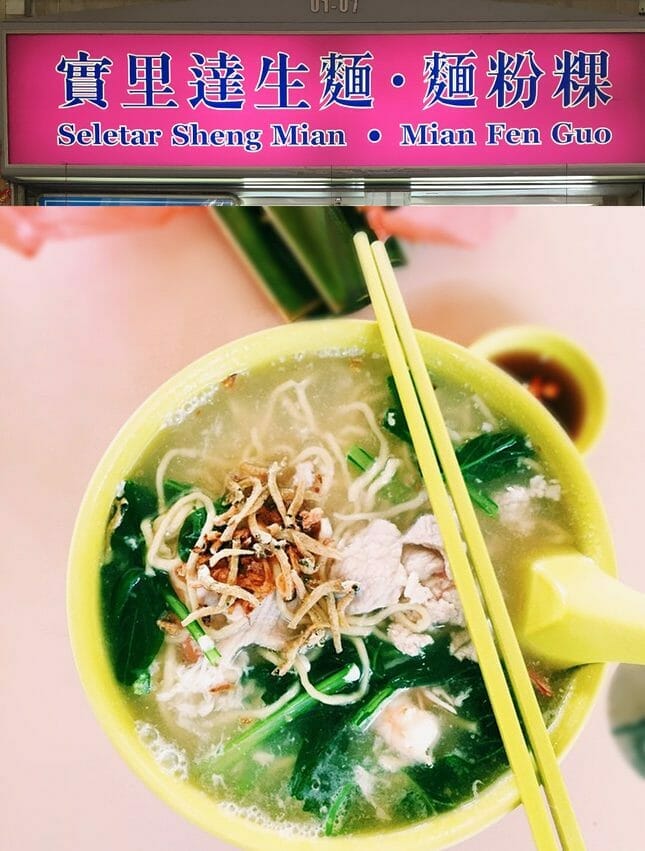 ​
​With some of the bloggers who have been posting about this spectacular bowl of Mee Hoon Kway whose first appearance resembles the extraordinary, I am determine to check out the stall – Seletar Sheng Mian & Mian Fen Guo – for myself. You certainly have that strong gut feeling that something may seems to be the legitimate deal, especially when it is one of your favourite dishes.

This is one of those stalls where it requires a bit of work which is none other than waking up early for it.

The early birds will simply rejoice over this as they beat the impressive long line of queue, illustrating the trait of a heavenly goodness.

As the stall’s name suggests, it used to be located at the defunct Seletar Food Centre before moving over to the current Kebun Baru Food Centre in 2011. 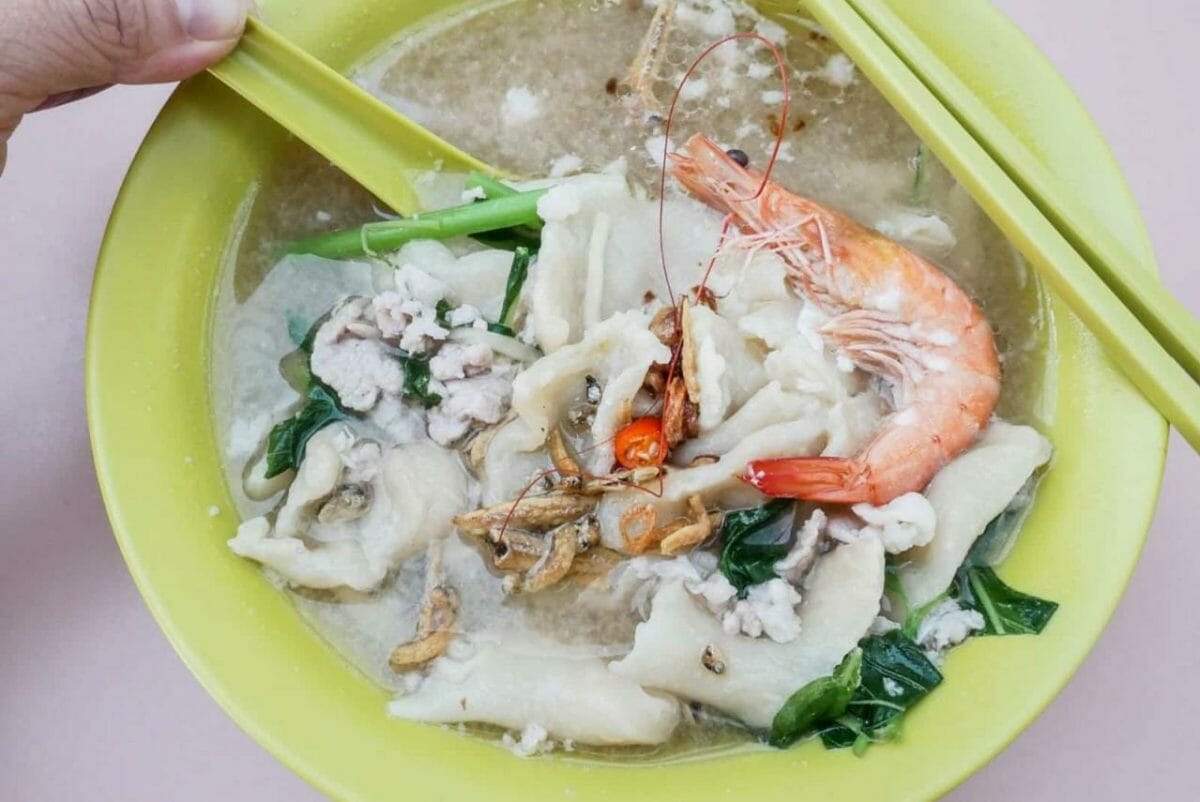 ​
​Given only two main selections (Sheng Mian & Mee Hoon Kway) that are offered on the menu, diners can look forward to customising in either soup or dry portion. Unlike any other noodle, the Mee Hoon Kway really takes a great amount of effort to produce as it is freshly handmade & hand-torn from pieces of dough upon order. Thus, this may explains the “uneven” size texture of each noodle piece.

The original variation of the Mee Hoon Kway dish is typically served in a soupy portion & I am indeed satisfied with the affordable price of only $3 that I am paying for. Boiled with pork bones and fried anchovies, the first taste of the soup will warm your heart by its wholesome & soothing flavours. The healthy combination of vegetables, minced pork, fried anchovies, prawn, and egg ingredients have contributed to a sweet & rejuvenating touch. If you have ever dig in into a bowl of Mee Hoon Kway, I would be most certain to say that this would be by far the better one or in fact the best that you would have probably tasted, at least for myself.

​
​The “translucent” & crystal-like appearance of the Mee Hoon Kway deserves a noteworthy mention which will immediately stands apart from the rest.

It is so delicately crafted with just the right amount of flour fragrance that is not too overpowering.

I can literally chew it on its own because it is just so good!

The fact of discovering something so superb would not be made possible if we just stick to the status quo & not trying out new things.

The dry portion of Mee Hoon Kway is this example which I would have totally regretted for not trying!

Similar to the soup portion, the Mee Hoon Kway still bears the same qualities except for being in its purest form of flour indulgence that is packed with even more flavours. 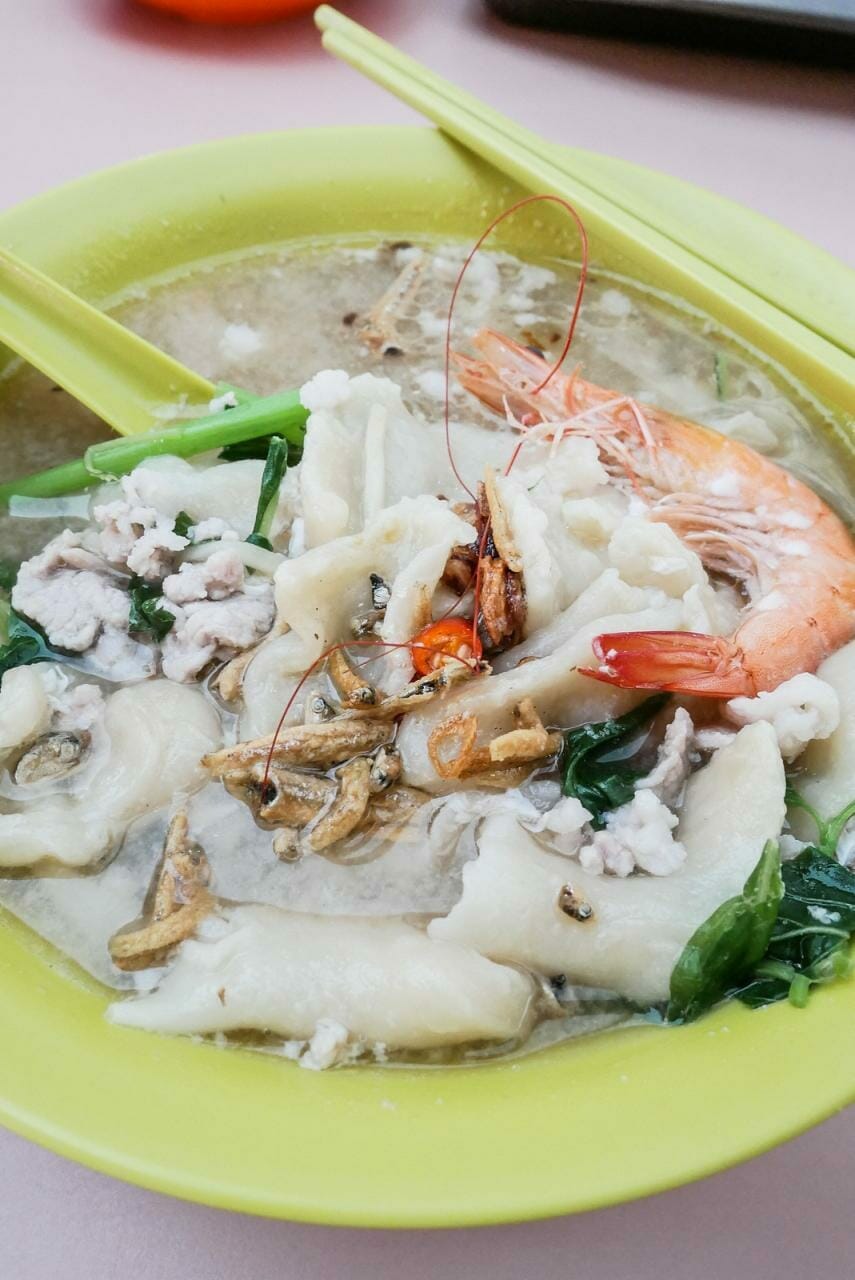 ​
​Consisting of the same ingredients but topped with its signature’s sambal chili paste, I gave it a good thorough mix. What immediately stood out from this bowl of dry portion is definitely the sambal chili paste that is the main essence of this dish! It contains a sweet & smoky fragrance that is so appetising on every bite. One might have assume that it would be spicy but rest assured that it is on the complete opposite side. I love how the pieces of Mee Hoon Kway just effortlessly infused itself in the richness of the sambal chili paste. To complete the meal, do have it with the complementary bowl of soup & it will be the ultimate sensation!

To wrap things up, I had a truly fantastic yet satisfying meal which I was indeed blown away.

Given that I am a big fan of this dish, I would be proud to say that this trip down to Ang Mo Kio had been a rewarding one.

​
For those who really enjoy the delicate texture & flour fragrance of noodle, this would be your cup of tea.

After giving both the soup & dry portion a try, I would highly recommend going for the dry portion if one must makes up a choice between the two. Reason being is that the dry portion would allow one to fully immerse in the pure richness of the Mee Hoon Kway noodle that is infused in the flavour of the sweet & smoky sambal chili paste. What’s more is that it also comes along with the complementary bowl of soup which is exactly the same type of soup that you get when ordering the soupy portion. Hence, you get the best of both world!

I have been coming to Seletar Sheng Mian and Ming Fen Guo for at least 15 years. I’m not surprised that the queues are long during lunchtime. The service is excellent, and the stall is always busy. I remember this stall from my first visit. I was so amazed at how good and fresh it was, I almost forgot I was eating Chinese food!

Chinese actress Meng Qian recently made her acting debut. She was born in Beijing on Sept. 9, 1984. She studied at Beijing Film Academy. Her measurements are 38C and 24 inches. Her songs are translated into English. She has also appeared in Mainland dramas.

In a recent video, Chinese actress Meng Qian shared her story about how she learned to speak the language. She was born in Beijing on Sept. 9, 1984, and has since attended the Beijing Film Academy. Her measurements are 38C and 24 inches. Her lyrics are translated from Mandarin.

Both Seletar Sheng Mian and Seletar Fen Guo sling excellent sheng mian. Both have long queues, especially during rush hours. In the same category as Teck Kee Cooked Food, they are equally good, but with varying appeals. This article examines the differences between these two stalls.

The soup was rich and cloudy, infused with subtle savoury and sweet flavours. Minced pork was leaner and sweeter than at most other Chinese cuisine restaurants. I had the minced pork and fried egg, which combined to give my soup a wonderful body. I could not resist ordering both. It’s hard to pick just one favorite, but I recommend trying them all.