Through my years of food discovery, there’s certainly only one place that would moved my heart for a scrumptious yet mouthwatering Indian food cuisine, would be this restaurant by the name of “The Banana Leaf Apolo”!

I have being patronising this restaurant since childhood along with my parents, to get our Indian food’s craving fixed from time to time.

Located along Race Course Road with all the big Indian eatery names dominating the entire stretch with their signature fish head curry, it is also no wonder why it has been a challenging task to settle down for the perfect restaurant if you are new to this area!

Established since year 1974, “The Banana Leaf Apolo” is extremely famous between its locals & tourists for having a wide variety of Indian cuisine that spread across Northern & Southern delights!

This restaurant is also notably famous for its food menu that boasts a Guinness world record for largest serving of fish heads!

​Upon stepping into its spacious seating restaurant, one would certainly be greeted by the distinctive fragrant aroma of traditional Indian spices that spreads all the way to the kitchen, on top of identifying the classy & well-polished environment of ceiling lights with table & chairs. ​ 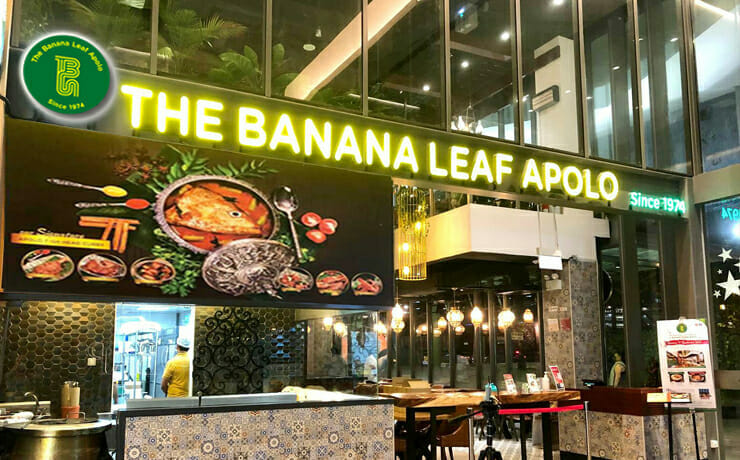 As the name of the restaurant suggest, all the plates on the tables are laid with fresh banana leaf on top, providing a unique dining experience!

Each plate will then be filled with two main complimentary appetiser whom the waiter will come around to fill the top portion of your plate with some light yellow watery cabbages & eggplant curry to kick-start your palate.

​I personally have always enjoyed their cabbages as it was cooked in a sweet watery mixture with Star Anise that have tasted wonderful & juicy with every bite!

Sweet watery mixture of Cabbages!
My family and I always love to have our plate to be filled with rice that comes in two different types to choose from, which is the biryani or white rice!

Our choice of preference would always have to be Biryani rice which is one of the best comforting staple food in traditional indian cuisine.

It was cooked using Basmati rice that was so well flavoured as a whole, had carried a very light aromatic smell which was so fluffy with every grain!

​The rice is certainly great to be even eaten on its own that I could not resist of asking for more throughout the entire meal! 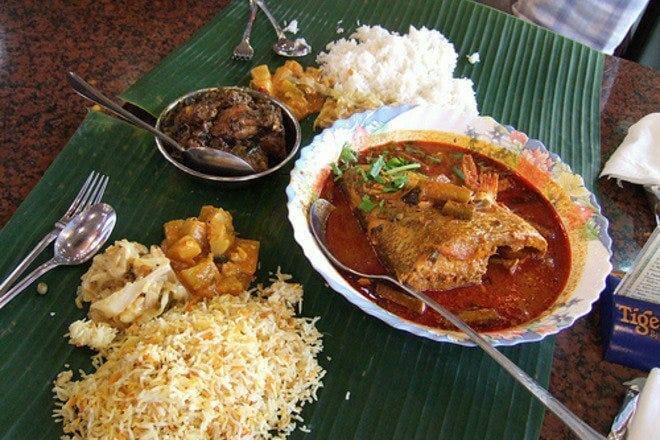 Delicate texture of each Basmati rice grain!
The time has finally come after all the basic “arrangements” were made, that we were ready to order our main dishes! As we are a frequent patronised customers, there were certainly a standard few dishes which we recommend it as a must to order! We ordered the “Apolo Fish Head Curry”, “Fish Roe”, “Chicken 65” and “Chicken Masala” to begin our entire feasting!
The “Apolo Fish Head Curry” comes in a hot simmered bowl that carried the heavenly aromatic smell of herbs & spices!

The fish head that came along with it was of a Snapper fish that was all filled with meat along its clavicle (collar), had fully immersed with the rich flavour of the curry that had contained some vegetable ingredients such as pineapples, tomatoes & ladyfingers.

The curry itself was of a soup gravy mixture, had tasted the lightness of spices added to it, and was so absolutely tasty to even drink it on its own! I personally love how the curry had tasted as it had also contained a taste of sweetness at the end of every spoonful!

​The meat of the fish was so soft & delicate that carried the flavours of the curry, was absolutely scrumptious to savour with every mouthwatering bite.
Soft & delicate Snapper’s meat
The “Fish Roe” was also my family favourite kind of dish as it is strictly dependent on your luck for that particular day!

As fish roe is one of the exotic and rare treat that are limited in quantity, they are easily sold out as a result. Thus, if you are in luck for that, its always a must to order!

The “Fish Roe” had came marinated in some indian spices & curry leaves that was deep fried as a whole, had produced a chewy texture to it!

The roe itself is soft in texture that contained many tiny egg masses on the inside, was of a slight saltier taste. I could really taste the marinated spices which had brought the fish roe a much vibrant flavour to savour.

​Apart from the roe itself, the roe flakes (crispy & tiny crust on the outside) were equally delicious to taste, was crispy & fragrant that resembles like tidbits snacks!
Crispy & fragrant roe flakes!
​The next dish on the list is “Chicken 65” which is no doubt also my favourite on the menu!

The chicken was marinated in masala & deep-fried that was similar to the reddish appearance of the “Fish Roe”, was topped with fresh slices of onions as well.

The meat of the chicken had carried a sweet fragrant aroma from the spices, was tender as a whole to savour!

​I really love this dish as it goes absolutely well with the comforting taste of the Biryani rice, which is also a good choice to eat it over with white rice, to fully enjoy the richness of the deep-fried masala flavour!

The entire meal of scrumptious Indian cuisine delight would not be completed without an authentic taste of Masala flavoured dish which is the “Chicken Masala” that is cooked in thick Masala paste!

The whole meat dish was covered in a smooth and mushy dry curry alike base with thick Masala paste all over it, was certainly one of the key highlight on the menu itself!

​The chicken in particular had carried a firm texture, was delightful to savour due to how fragrant and immersed it was, from the heavenly flavour of the thick Masala paste.
Firm texture of the Chicken Masala!
​Our entire meal was always a pleasant and delightful experience as a whole that we would always takeaway any leftover gravy or meat if there is, to continue feasting for the next day!

And did I forget to mention regarding the best part of this restaurant? It was the fact that any addition of the biryani or white rice was totally free of charge which is priced at the minimum serving per person!

​I would always leave this restaurant all satisfied every single time that my whole appetite filling was similar to indulging over at a buffet! Thus, I would certainly recommend this restaurant due to its authentic taste of varieties between Northern & Southern delights, that would totally leaves a satisfaction smile on your face!

We stayed at the Banana Leaf Apolo for our friends’ graduation party. We were pleasantly surprised by the quality of the food and service. While the restaurant was very accommodating and set up well for a large group, we had some reservations. We were seated at a table near each other. We were able to move around the room without having to wait long for a table. After the event, the group went back for another round.

The Banana Leaf Apolo is a family-run Indian restaurant in Singapore since 1974. The restaurant wanted to expand its reach beyond the city’s quaint little streets to the many shopping malls across the region. Gensler was hired to design its latest outlet at the Parkway Parade Shopping Mall in Singapore. Gensler created a new brand identity for the restaurant that exudes a warm, inviting front while keeping the authenticity of Indian culture. Gensler collaborated with several of their offices throughout Asia in order to achieve the right balance between modernity and authenticity.

The Banana Leaf Apolo is a family-run Indian restaurant business in Singapore. Having opened its first outlet in 1974, the family wanted to expand into shopping malls. It sought the help of Gensler to design the restaurant’s latest outlet at the Parkway Parade Mall. The designers were tasked with creating a new brand image for the restaurant, which exudes a contemporary, inviting front while maintaining the authenticity of Indian culture. In order to achieve the design, Gensler collaborated with its offices across Asia, which gave it an advantage of having expertise in several different fields.

The owner of the popular Indian restaurant, The Banana Leaf Apolo, is facing a flurry of charges. In total, 46 charges have been laid against the owners. This comes on the heels of a previous investigation which found that the restaurant knowingly made false statements to the Ministry of Manpower. The alleged offences involved the self-service buffet and allowing customers to make speeches.

The popular Indian restaurant chain has been charged with multiple COVID-19 law breaches. This is a reopening of Singapore, which implemented the Covid-19 rules to keep restaurants safe. Under these rules, the number of people who can publicly gather in groups while dining out is limited to five. This rule also prevents restaurants from using self-service buffet lines. To prevent these violations, Banana Leaf Apolo has been restricted to groups of five or less.

At the Banana Leaf Apolo, guests are not required to wear shoes and shirts. This means you should be comfortable. This group-friendly restaurant is located in Little India, a district of Singapore, near public transport and good food outlets. A room is spacious, with a wooden floor and colonial shutters. Groups of up to five people are welcomed to dine there. The restaurant is also close to the MRT, which makes it easy to get to.