Skip to content
Cappadocia, home to one of the most astonishingly unique landscapes in the world, has evolved from the erosion of the ash sedimentation by natural climate, to the land forming rising sculptures of countless strangely shaped pillars and cones.

​These sculptures, more commonly known as “Fairy Chimneys”, are located in the Göreme National Park, which has gained enough recognition to be added to the UNESCO World Heritage List in 1985.

Due to its iconic landscape, it has also become one of the most popular spots in the world to go up in a Hot Air Balloon during sunrise, to witness the spectacular and surreal view of the landscape.

​During my trip in October 2015, I was really lucky on the 2nd day before leaving Cappadocia to have embarked on the most unforgettable ride of my lifetime, as receiving this opportunity is strictly dependent on the weather for that particular day.

That morning on the day of the ride, we woke up as early as 5.30am to begin setting off for Göreme National Park, approximately a 20 minute bus ride from our hotel, just in time for sunrise!

Upon reaching, we were first greeted with a welcome breakfast at a hut that consisted of various quick bites such as pastries and a cup of coffee or tea to keep ourselves warm & refreshed before the ride!

​In the meantime, the balloon flight crew were already getting prepared with all the necessary equipment to inflate the balloon and prepare a safety check to determine if the weather would be fit for flying. ​ 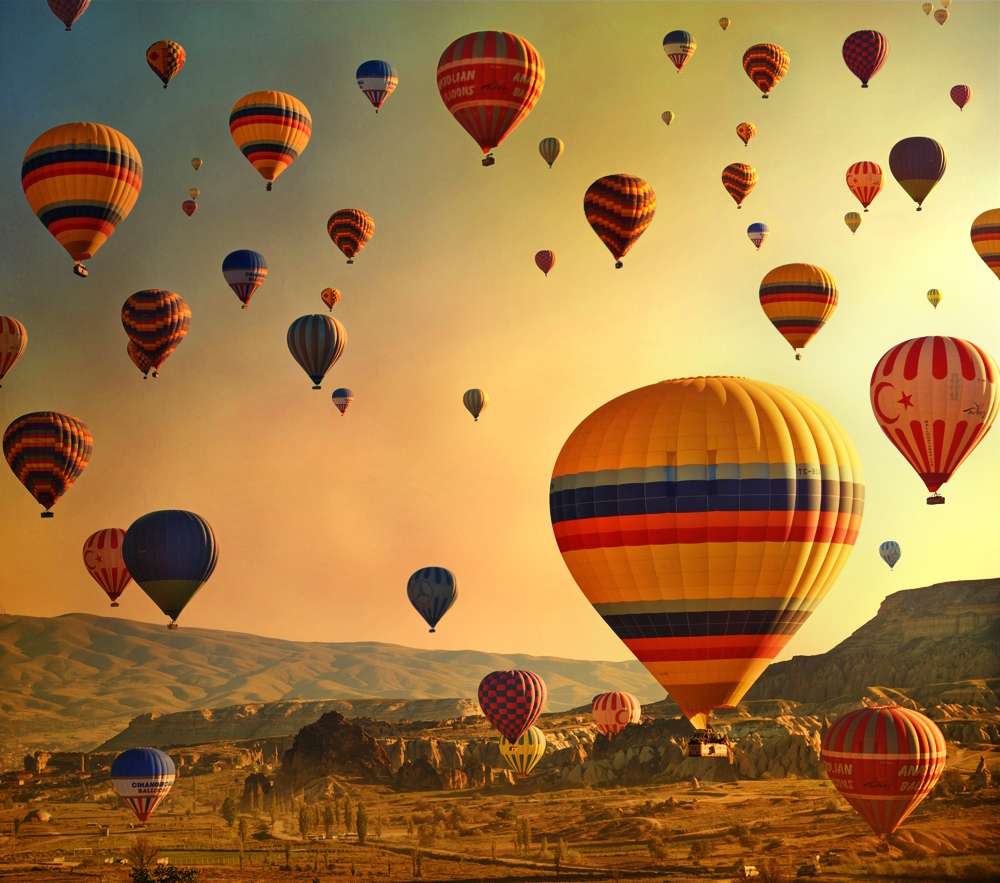 Inflating a hot air balloon!​
There were also numerous tour groups of people who were also waiting to embark, all of various nationalities and from the USA, Japan, China & Malaysia.

We were all here for a common purpose, to see a birds’ eye overview of the entire scenery as what is being famously featured around the world!

​Up ‘till then, nobody was certain if it would be a guarantee take-off or not, as it is really all dependent on luck. ​

After breakfast, we took another short bus ride merely round the corner to get to the set-off point located in a vineyard, where the sky had already started to illuminate as sunrise fell upon us.

We were surrounded by the sight of the gigantic and magnificent “Fairy Chimneys”, literally forcing us to voluntarily take out our camera to get a photo of the legendary sight!

​Upon reaching, the whole compound was filled with numerous numbers of balloon companies, wherein each is differentiated by their company logo printed on the balloon itself, making it easier to distinctly recognise one another.

Göreme National Park
Our tour guide directed us to our balloon company and we were so delighted that we all shouted for joy when we saw the hot-air balloon inflate, which is a sign that the weather is of favourable condition for take-off!

​Indeed, we have eagerly long-awaited this moment, ever since we had signed up for this tour package to Turkey and especially due to having received the dreaded piece of bad news of the undesirable weather conditions yesterday. We were and still are really thankful for this blessing from God. ​ 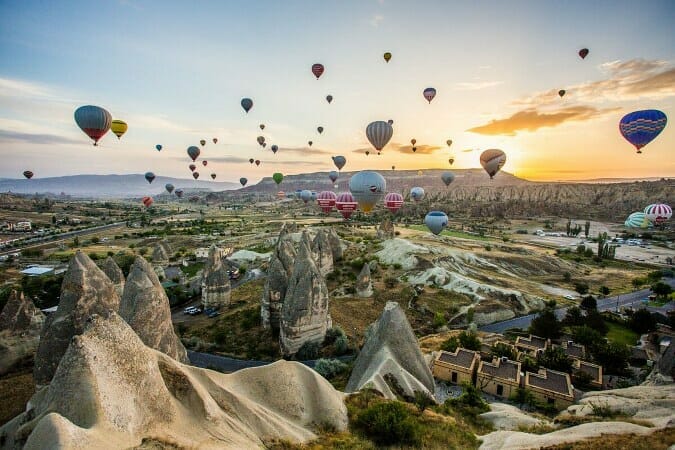 For the first time ever, I was able to lay my eyes on the size of these gigantic hot-air balloons as opposed to simply seeing them on television, where they appear to be much smaller.

These gigantic balloons were installed with numerous burner units right in the center, just above the large basket which consists of a maximum capacity of 16 passengers per flight.

We hopped into the basket supported by some steps on each side & were quick to realise that the inner layer of the basket was indeed deep in height, approximately to the level of our abdomens. ​

Wooden basket’s height to our abdomen level!
In each hot air balloon, there is only one pilot who is responsible for managing the altitude control & the safety of the passengers. He taught us a simple knee-bending technique in preparation for the safe descent of the trip later.

After having ensured that the path of traffic was clear to go, the pilot pulled down the burner switch by giving it a squeeze which literally causes the burner to burn even more as an open flame of hot air, allowing our balloon to take off.

​The balloon started rising higher and higher off the ground, and there was actually not much of a feeling except when one bent over to look down or to look across the cloud-filled skies.  ​

View from above in a hot air balloon!
Before we had come to realise it, the pilot had brought us up to the sky at the maximum altitude of 800m for which a hot-air balloon could go up to.

The view up here was indeed spectacular as the mountain and land looked so miniature, reminiscent of the feeling of looking out from a window seat of a plane but without its confined walls.

Thereafter, the pilot allowed us to catch a better glimpse of the entire Göreme National Park along with the iconic “Fairy Chimneys” located everywhere over the hills by taking a descent.

​The sight of all the other balloons high above the sky along with the background landscape of the park, fused with myriads of colours, brought a sense of happiness & freedom. ​

The whole balloon ride journey lasted an hour, with the balloon descending over the hills and finally onto the open vineyards with a smooth touchdown.

We then got out of the basket to savour, over a glass of champagne, the beautiful vineyards under the sun.

​Everyone’s faces were filled with joyful satisfaction, really making the pilot’s day, and it was definitely one of those special rare days for me to get to see so many radiant smiles!

Before bidding farewell to the pilot and crew, we received a certificate of participation as a memento & had a group photo with everyone!

Indeed, it is definitely a day that I will remember for life, as up ‘till now, it still feels so surreal with the whole experience that I can still remember it in vivid detail today!
Hot-air-balloon ride, we have conquered it! XOXO.

For my trip, we embarked on a trip with KAPADOKYA KAYA BALLOONS which costs USD $220 per person, making it rather expensive!

​Taking in account the scenery & especially the safety means of the balloon company, the whole ride was really safe & is well-worth the money, especially with the scenery! Definitely, not to miss out on when you are over here in Cappadocia, Turkey! 🙂