Skip to content
I had never knew that I would discover another dish that was certainly going to blow me away, over here at Maxwell food centre!

This stall by the name of Jing Hua Fish Head Bee Hoon, sells a scrumptious bowl of Fish delight in a bee hoon soup that could be paired with a choice of fried or steamed variation fish!

​It is also one of the many stalls in Maxwell food centre to have extremely long line of customers especially during meal hours which is advisable to come early!

Upon taking a step to the stall itself, one would certainly distinguish by the numerous food critics award that was presented for its outstanding dish!

Despite having just a limited variation of food menu that consist of up to six dishes to choose from, it has still become a hit between the locals due to how pleasantly perfect each bowl has been prepared.

​The owner of the stall has taken on a meticulous practice of preparing each order using a separate pot, one at a time, to ensure the freshness & quality of every bowl served. 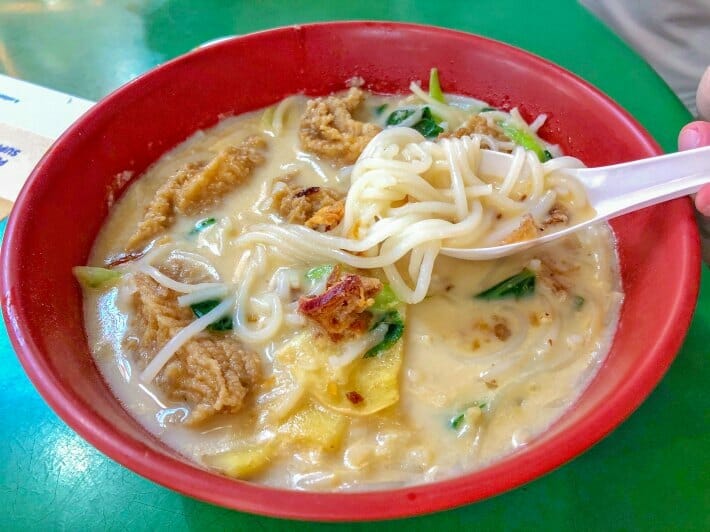 ​The Fish Meat Bee Hoon is one of my favourites over here as the broth had contained a light refreshing taste from the evaporated milk added, while carrying a taste of sweetness at the end of every spoon!

The broth is equally refreshing to savour which is particularly great if you are looking for something not too greasy and yet tasty at the same time.

I found itself to be so “addictive” in a scrumptious way that I could not help but to dig in for more, even till the point that I had particularly finish the entire bowl of goodness! On the other hand, the deep-fried fish has a slight crispiness texture & sweetness from its batter, which had turned out to be both greasy while yet being fragrant at the same time.

The star highlight of this scrumptious dish would definitely have to be its thick rice noodles that was used!

I really love its thick rice noodle as it was so well prepared as a whole that you could totally feel each individual strand while savouring!

It also carries a smooth slippery texture which had fully absorb the richness of the broth essence.

​
This is probably one of the best noodles’ texture that have really made me fall in love every single time.

Delicate thick rice noodle!
​All in all, it is certainly one of the best meal experience that I have really enjoyed & would look out for when dining in over here!

​
It is such a scrumptious treat especially for its thick rice noodles & broth that I will not hesitate recommending this particular stall!

​It is definitely one of those traits that separates itself from your definition of a legit bowl of fish bee hoon soup as compared to others.

​Be sure to check out this outstanding stall when you are over here at Maxwell food centre!